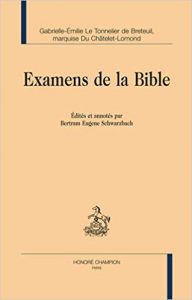 This book sees the publication of an eighteenth-century text about the Bible originally written by Gabrielle-Émilie le Tonnelier de Breteuil, marquise du Châtelet-Lomond (1706–1749), better known as Madame (Emilie) du Châtelet. This fine lady was a skilled scientist with an international reputation,  a remarkable feat for a woman in those days. She had Voltaire as friend and bedfellow and together they explored the new world of Newtonian physics. He helped her equip the laboratory at her castle in Cirey, she helped him get his maths right when he decided to popularize Newton (Elémens de la Philosophie de Neuton, mis à la portée de tout le monde, 1738). Much higher was the ambition of her own book Institutions de physique (a Physics Handbook) in which she tries to reconcile the natural philosophy of Newton and Wolff (1740, translated in German and Italian). Just before she died she completed a French translation of Newton’s Philosophiae naturalis principia mathematica, to which she added her own explanatory comments replacing Newton’s geometrical proofs with algebraic formulas (posthumously published in two volumes, 1756).

At some point in the early 1740’s, i.e. in between these two major scientific exploits she must have turned her attention to the Bible, writing down her observations and comments reading it ‘d’un bout à l’autre’ (dixit Voltaire in her necrology). Du Châtelet was not versed in theology and apparently contented herself with reading the Vulgate. For exegetical questions and other issues she consulted the almost exhaustive Commentaire littéral de la Bible (23 volumes, 1707-1717) by the very pious Dom. Augustin Calmet, in which all problematic issues were neatly exposed, discussed and – in the author’s eyes – conclusively solved or refuted. From the first lines of the Examens de la Bible it is clear that Du Châtelet must have smiled (benignly) at his naivety, while gratefully using the information provided by Calmet to construct her own interpretation of the text. These examinations were never meant to be published, but were part of the clandestine literature that circulated in France among friends who were of the same mind. Criticising the Bible and the Church still was a dangerous in those days. As point of reference; it is only in 1774 that G.E. Lessing began to publish Reimarus’s Fragmente, and Voltaire’s La Bible enfin expliquée only appeared in print in 1776. Both of these maintained a secretive character.

For his transcription Bertram E. Schwarzbach had access to the three extant copies. In his material and textual analysis of these copies, Schwarzbach convincingly shows that none of them is directly based on the original notes made by Du Châtelet, but probably all go back to one original copy. The three copies get as siglum P, B and T referring to the place of their present location: Paris (private collection), the Royal Library of Brussels, and the Municipal Library of Troyes. Schwarzbach transcribes the text according to the usual standards of a critical edition. Since Du Châtelet’s intention with this text is quite clear (a quick-witted sequential commentary on the entire Bible), Schwarzbach opts for a hybrid text-edition: at the same time scientific and readable. In this he succeeds. With a minimum of orthographical modernization he presents an eclectic synthesis of his three sources mainly following the most trustworthy source (P) correcting only obvious mistakes. In the critical apparatus he always offers the original and/or different readings. Below the critical apparatus (covering generally only two or three lines per page) are the editor’s notes. Here Schwarzbach presents the necessary textual clarification and relevant extracts from the sources used by Du Châtelet or to which she explicitly or implicitly refers. In the extensive preface (152 pages) Du Châtelet’s text is properly situated and analysed, the philosophical and historical context is sketched and Du Châtelet’s approach of and view of the Bible is neatly summarised. Sources she might have used are listed and generally discounted. Only occasionally are they considered relevant for the genesis and understanding of her text. Emilie du Châtelet was an independent thinker. Calmet provided Du Châtelet with a sufficient knowledge base and remains her preferred interlocutor throughout the entire examination. Contrary to the generally accepted view (based on the legend of Voltaire and Du Châtelet discussing the Bible at breakfast in her castle in Cirey) it turns out that there is hardly any link between Du Châtelet’s text and Voltaire’s biblical observations as published in his La Bible enfin expliquée. Since the text is transmitted without mentioning an author, the attribution to Du Châtelet is also put to the test. This part reads like a detective story.

From p. 155 onwards one can start to read and appreciate Du Châtelet’s notes on the Bible. They are her private comments but the way she formulates her findings and opinions indicates that she did want them to be read by her equally enlightened friends. The complete freedom of mind and absolute lack of reverence for Bible, Church, theology and God are remarkable, even today. In her eyes the Bible is irrelevant for acquiring knowledge of the world and she strongly advises against using the Bible as a guideline for personal and societal ethics. To her, Christianity is obsolete and the concepts of revelation and supernatural interference are ridiculous. After 800 pages she ends her Examens with an ironic eulogy of the wondrous construction of the New Jerusalem: entirely gold, yet completely transparent (‘Il est difficile de savoir comment de l’or peut estre comme du verre transparent. Mais cela ny fait rien, cette Jérusalem-là est un bel edifice’, p. 957) followed by two small essays on the Antichrist and the Resurrection of the Dead (‘une des choses les plus consolantes, et les plus absurdes que les hommes ayent jamais imaginées’, p. 965).

In the way she ‘dissects’ the bible text, she shows little feeling for historical criticism or for discerning and evaluating different literary genres. As is so often the case, the biblicist (Calmet) and the agnostic/atheist (Du Châtelet) fight their battles on the common ground of historical positivism. Once it is accepted that this is the way she reads the Bible, her observations are generally quite to the point and the way she makes her point has a high ‘tongue-in-cheek’ quality, which makes for pleasant reading. On occasion the irony gets a cynical undertone, e.g. when she comments on the prophet Hosea who had to marry a prostitute: ‘Ozéé acheta une femme adultere 15 pieces d’argent et deux mesures de froment. Ce qui n’est pas cher si elle est jolie’ (p. 558). In one point she was ahead of her time. When it comes to glosses in the bible text (redaction-history as this discipline is called nowadays) she uses this fact to criticize the trustworthiness of the text, but does not participate in the discussion on which parts of the gospel or other texts are glossed and which are authentic, although this discussion is present in Calmet. At the occasion of the most famous gloss of the entire Bible, the comma Johanneum, she simply notes that the best fraud is the one that goes unnoticed (‘Or cette pieuse fraude dont on s’est apercu peut nous faire juger de toutes celles dont on ne s’apperçoit pas’ p. 938-939). This lucid observation reveals her awareness of the methodological impossibility of arriving at conclusive historical judgments based on texts alone, an insight the scholarly world took almost two centuries to achieve.

The book concludes with a bibliography of relevant texts (manuscripts and publications). Since the editing was completed in 2002 the most recent publications are absent, such as (partial) re-editions and translations of Du Châtelet’s works, several conference proceedings, monographs, and the new scholarly biography by Judith P. Zinssner, all sparked by the tercentenary of Du Châtelet’s birth (2006).

Thanks to the effort of Bertrand E. Schwarzbach – and it really must have been an arduous process deciphering and compiling the three manuscripts while checking the references which are more often implicit than explicit – Du Châtelet’s observations on the Bible are now easily accessible for any interested reader.